Tung Chee-hwa on China Now and in the Year 2049

Good old Tung Chee-hwa, former HKSAR chief executive, gives further proof that ‘old dogs don’t learn anything new’. He is still as patriotic, paranoid, and puppet-like as ever, seemingly knowing that ‘Beijing Big Brother’ is watching his every move.

He’s as bumbling as ever too. In an attempt to make China sound great in 40 years time, an SCMP article (subscription required) on September 11 headlined “Tung ‘makes no apologies’ for mainland rights development” quoted him saying:

“I’m very confident that when the new China celebrates its 100th year – in 40 years’ time – she will definitely have become a modern, stable, democratic, civilised, harmonious country.“

With Chinese leaders, representatives and spokespeople, it is always vital to read between the lines. So what Tung Chee-hwa actually said is that:

“At present China is non-progressive, unstable, undemocratic, uncivilsed, and disharmonious.” 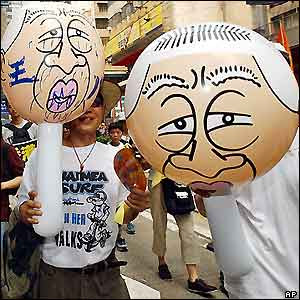 [Tung Chee-hwa tells his ‘foreign friends’ that he makes no apologies for China being non-progressive, unstable, undemocratic, uncivilsed, and disharmonious. Photo from BBC News archives.]

This entry was posted on Saturday, September 12th, 2009 at 00:25 and is filed under media, politics, society. You can follow any responses to this entry through the RSS 2.0 feed. You can leave a response, or trackback from your own site.